In the latest interview on ETS, Finland and FC Midtjylland midfielder Tim Sparv generously answered some of my questions. Make sure you follow him on Twitter and catch up with his regular column for Pohjalainen. 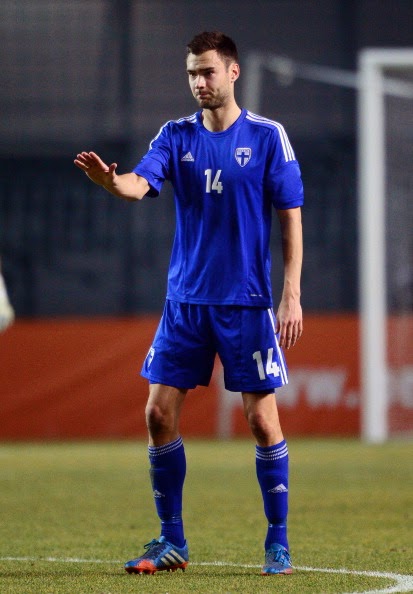 Tim in action for Finland v Hungary in March 2014 (Getty)


You're a well-travelled man. How is Denmark different from the other places you've played in? Would you advise youngsters to move abroad to sample new countries?

I'm lucky to have experienced so much already. Denmark and FC Midtjylland is a more laid back place than for example my last club in Germany. Not saying that they demand less from you, the work ethic and attitude in training is very good, but there is definitely a more relaxed atmosphere here. Quality-wise there's no real difference between Groningen, Greuther Fürth and FC Midtjylland. In my current club we have a great mix of experienced players having played abroad and our own youth players coming through the academy.

My advice to talented young players is to be at a club where you have good coaches and other talented youngsters to train with/against. If that's in Finland or abroad, it doesn't matter. There's also a difference between individuals. Some are mature enough to move abroad at a younger age, others are better staying closer to home. There's no right or wrong, you have to do what you think is best for your own development.In the end it's up to yourself. How much are you willing to sacrifice to become the best you can be. We can try and improve the facilities, coaching and so on, but if you don't have the will and discipline, you won't have a career in professional football. 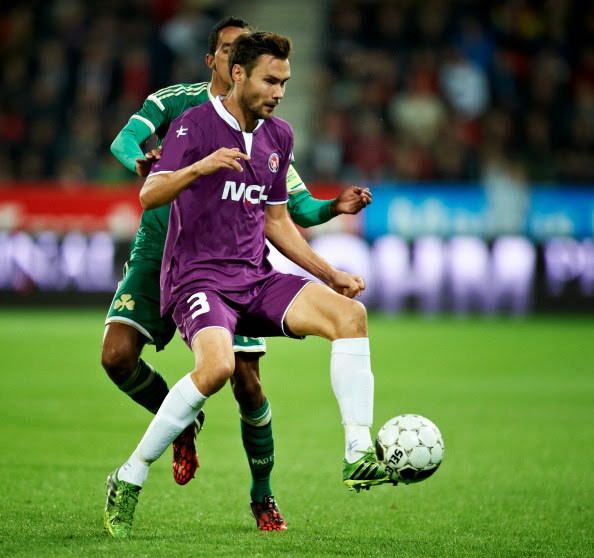 You spent time at Southampton as a youngster. Does their excellent form in recent years surprise you? With Bale, Walcott and Lallana doing so well, were there any others there at the time who you thought would make it as far?

They're second in the table (at the time of writing), that surprises me of course. That they had to go down to League One, because of a few bad decisions, to re-build was also not something I expected. Saints are a Premier League club, so it did hurt a bit following their collapse. I'm glad to see they're back where they belong, and I'm especially glad for my friend and former team-mate Dusan Tadic and the way he's been playing since he arrived.

Along with the names mentioned, there were also Nathan Dyer (now at Swansea), Leon Best (Derby), Dexter Blackstock (Nottingham Forest), Matthew Mills (Bolton), Andrew Surman (Bournemouth) and a few more who showed potential. The player who stood out from the start was Theo Walcott. He was the youngster everyone was talking about back then. 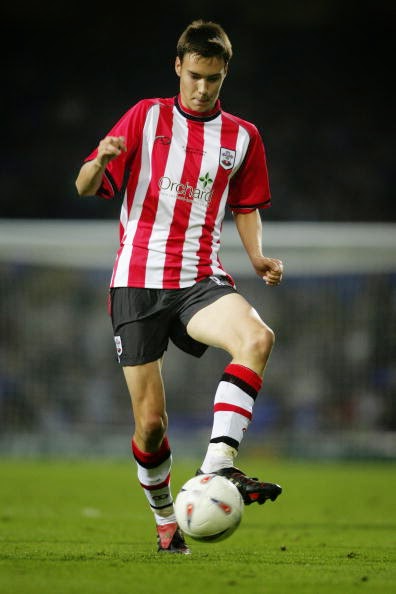 Do you plan on taking what you've learned into coaching at some point, perhaps in Finland?

That's possible. I can't see me leaving football, I love it too much. Coaching and scouting is something I'm very interested in. It would be nice to perhaps work in or around Vaasa one day, if we decide to move back. Maybe working with younger players as well. Time will tell.

What experiences do you remember most about being involved in the 2003 World Youth Championship and the 2009 European U21 Championship?

In 2003 I didn't play a minute in the actual tournament. I was a year younger and came in at a later stage. And to be fair I wasn't physically strong enough then. But the whole experience before the tournament, with trips to Chile and the US was incredible for a young boy coming from a small village on the west coast. It opened my eyes.

The U21 Euros was result-wise a disappointment. With Spain, England and Germany in the same group, we knew it would be difficult. But the whole two year project leading up to that tournament was in so many ways a dream. Winning the group and eventually beating Austria in the play-off game on penalties in Turku. And doing it together with the best group of players and staff was very emotional. Being the captain, having that responsibility, scoring goals and being a part of something so big was from an individual point of view a definite highlight in my career. 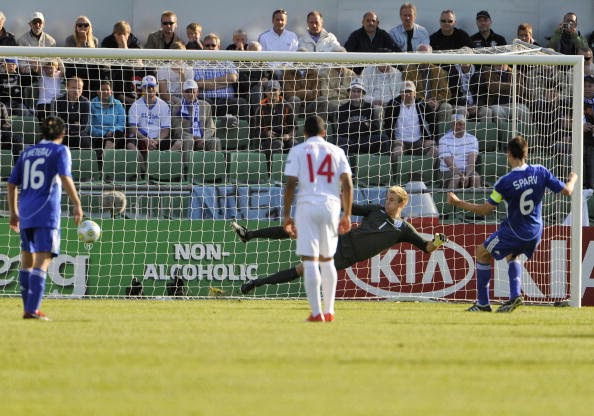 Have you enjoyed writing your column for Pohjalainen? What sort of subjects can we look forward to in the future?

I've enjoyed it for sure. I'm maybe not the typical footballer in that sense, then yet again, what is a typical footballer nowadays? But nonetheless I'm someone who likes to do things besides my work. To develop myself and to get my mind off football and maybe prepare myself for the future. It is a good way for me to get my thoughts out on paper and perhaps write a bit about things relating, mostly, to sport and people.

When you visited London last Christmas, what did you enjoy most about it?

Well, not the shopping in the city centre along with what felt like the rest of the world... Horrendous! The best was an Christmas Day when I met my Dad, who I didn't even know was in London, and had some wine and whisky. Me, my girlfriend and my Dad talked for hours until late at night. Good times. I'll be off to London again this Christmas, this time with friends. Spurs v United will be the highlight of the trip. 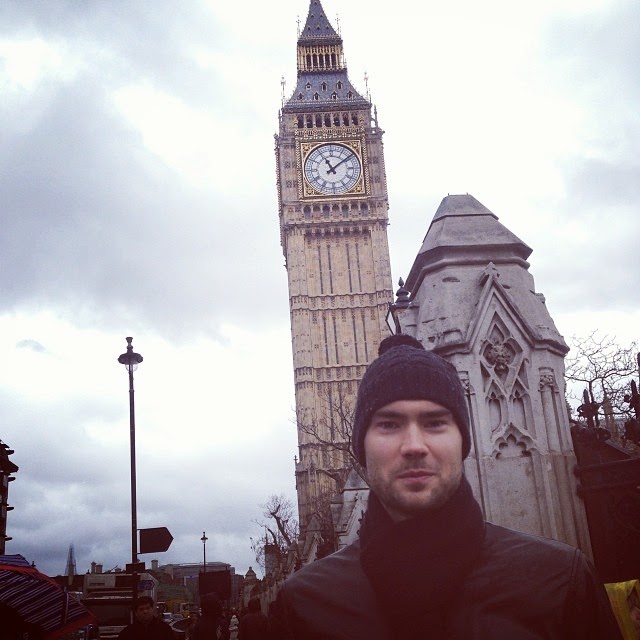 As a Manchester United fan, what do you think would improve their recent performances? Does being a professional player make it easier to see their failings?

One centre back and one defensive central midfielder. They've made some great signings, and Louis van Gaal is a good manager. His aura and tactical ability will suit Manchester United just fine. But they are nowhere near Chelsea, who I regard as the best team in the country at the minute. A place in the top four would be an OK start in his first season in charge.

You do see things in a game as a footballer that maybe someone else wouldn't. You see things happen a few steps before. Part of United's problem, if you don't count the individual mistakes, is that their balance in the team is off. Their attacking is a joy to watch but they're leaving to much space for the counter attacks. A bit naive and undisciplined I'd say. 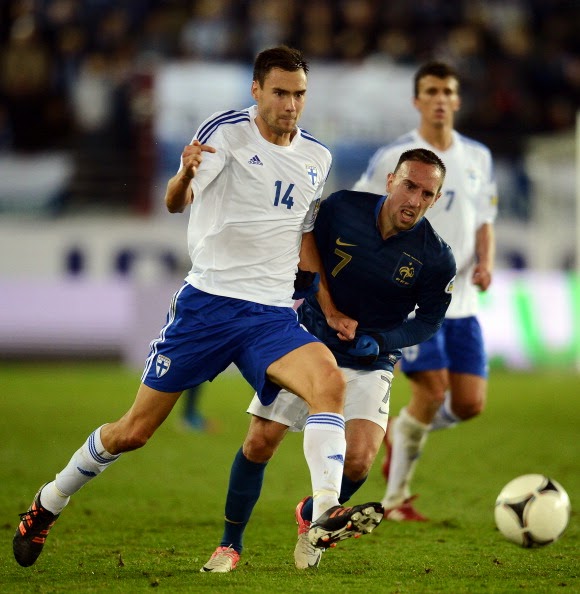 Finally, would you agree with the argument that more teams qualifying for Euro 2016 means that more teams are genuinely confident of making it to France? With sides like Iceland and Northern Ireland starting so well, does that inspire the Finnish squad even more?

Yes. More teams qualifying means a bigger chance for everyone. Even the smaller teams now have a realistic chance. It's great to see so many upsets already, now it's our turn to start upsetting some of the bigger footballing nations out there.

Many thanks to Tim for such insightful answers. Coming soon, we have an interview with HJK's singing winger Nikolai Alho, who has just launched his own media company. Hopefully over the winter there'll be a few more chats as well, I just need to pull my finger out...
Posted by Rich Nelson at 21:27

Sign up to get every new blog direct by email